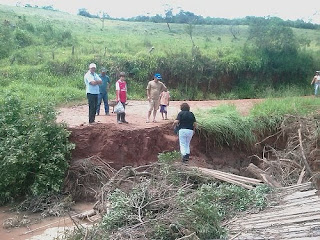 Communication can be many things, but being without communication is becoming something between a quasi religious self imposed relief, or a medium to severe suffering if not opted into voluntarily.
We had accepted an invitation from from my close friend, Elza, to spend New Year on her farm near Cunha in the state of Sao Paulo. Little did we know about the volume of rain that the region would receive during the following days.


View Larger Map
We arrived on January 30, and it had already been raining from the day before. As it is a very nice place with a cozy house with a good view to the surrounding hills, we were basically doing fine, and sitting talking on the veranda felt very good.

After spending the 31th sheltering from the rain, especially the kids wanted to go to Cunha to see the fireworks at midnight. So, at about 11 pm, we left in two cars for Cunha.The rain was still pouring down, and Elzas Fiat almost got stock in the mud on the five kilometer dirt road on the way to Cunha, and she wanted to go back to the farm, but as we were quite close to the town, we decided to go on to see the fireworks.
In Cunha we found shelter from the pouring rain in front of a closed shop from where we could observe the fireworks. Not the most impressive I had seen, but the kids were happy, and we had a great time making fun about the situation. From hereon things were about to happen.On our way back, the rain was still pouring down, and we were stopped by a mud slide on the dirt road. I stepped out of the car and checked the situation, and got totally wet. The mud was too deep to pass through, and more mud was beginning to slide, so we decided to get away before we would get buried in a new mud slide.
Soaked wet, I drove our Pajero 4x4 back to the town, where Elza helped us finding a small hotel where we could stay overnight for 20 Reais. Staying is probably the best word because it was hard to sleep in the pulsing noise from the new year party on the town square. During the night I woke up every hour, just to hear the rain pouring down outside the window.
Next morning, We tried to hire a bulldozer to remove the mud, but soon we received the information the one of the wooden bridges on the road to the farm was washed away, and we gave up on the project. 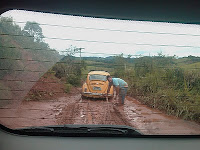 I went down to the homeland defense to see if we could help. We ended up towing a car out of the mud, and we managed to get the car well painted with mud on the inside as well.
Soon after, we learned that the two concrete bridges on the paved road back to the highway in Guaratingueta was also washed away, and we realized that we were in fact trapped in Cunha. During the

first of January the rain stopped, and we could begin to evaluate our recovery plan. We slept two nights in Cunha.In the region about 40 people got killed in the mud slides during the three days with virtually constant rain. All but one in a 7 person family died when their house was smached to pieces on the outskirts of Cunha by sliding soil from a steep hill above them. 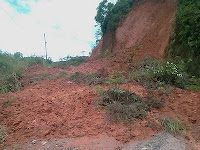 In Cunha, I bought two spades and a pair of boots, and drove outto the where the mud slides had occurred on the first night, only to discover that more slides had made the situation even more complicated. A few men had already started digging under the strong Brazilian summer sun, and after working for nearly two hours I got heavily sun burned, but we were close to a break through with the mud digging.
Finally, we managed to the get the car through. It didn't look nice (well, if you like dirt track you could have another opinion). The bridge was still down, so we had to drive through a swamp

area, and finally we got to the farm where we stayed for another day and a half. We decided to forget about the troubles around us, especially because the kids were beginning to get nervous about the whole thing. And while food and fuel began to run

out in Cunha, we had refulled on the first day we were trapped there, and were therefore well in control of the situation.
Our friend, Alex, who was driving a normal car could not get out through the swamp, so he was preparing to leave his car on the farm.

the neighborhood that we should be able to make it to Guaratingueta. So we decided to brake up and leave the farm, and as the local wooden brigde was not ready yet, even if a local team was working on it, we drove back through the swamp. The concrete brigdes on the way to Guaratingueta were repared with interim solutions, and we managed to get all the way to Rio. Alex got his car out also later that day as the wooden bridge got replaced.

So what is the conclusion about communication here?

On the farm there was no cellphone coverage, and the fixed line was in a state where you were forced to make qualified guesses on what people were saying at the other end. Fifteen years ago few people had a cell phone so there was no way to check up on friends and family when they were not close to a fixed phone. Now things are different, and my good friend John Strand (Strandconsult.com), with whom I keep frequent SMS contact, sent me an SMS during the fireworks in the rain in Cunha. I responded promtly. When he heard about the tragic accidents here in the region in the days after, he tried to send another message just to make sure that I was OK. At that time I was already at the farm, so consequently he could not even get a delivery confirmation on the message. So, suddenly, the lack of immidiate phone contact in Brazil caused stress and worries in Denmark more than 10.000 kilometers away. The combination of the speed by which the news travels, and the anytime anywhere online scenario, has in fact changed our habits and threshold for lack of communication.

As soon as I got back into cell coverage John got his confirmation, and I immiditely got a call from him, and things were calm again.

When I came to Brazil first in 1988, I used to make contact with my family back in Denmark every three months. In case of an event like this I would propably make contact right after, but the whole scenario would be totally diferent.

This story also makes me wonder how many divorces are induced to due bad coverage where couples are not being able to make contact via a cell phone...
See the full photo album here
Posted by Jesper Rhode at 1/06/2010 No comments: