The Brazilian IT development in a global context.

The investment in Information Technology is becoming a strategic factor in innovation and national development, and governments in all parts of the world are considering how to use IT to boost productivity and growth.

Companies IT and efficiency.
In times of crises, competitive position and productivity becomes even more important. From cases in several countries it can be shown that there is a connection between the investment in IT and GDP growth. An EU report from 2003 compared data from USA from 1995 to 2001, and found that sectors with high investment level in IT had an average growth of 3,5% against a negative average growth on -0,5% in sectors that did not invest in IT.
Lately companies are subject to so called consumerization, where the IT service and infrastructure is strongly influenced by the Web services and devices that we as as normal consumers have assess to with large mail boxes and sophisticated mail tools. The large consumer driven Web companies; Apple, Amazon, Google, and Facebook are all investing heavily in making their services mobile and available to users of smartphones, which today have a performance comparable with laptop computers. Today's employees bring this consumer experience with them to the companies they work for, and they expect that their workspace have the same convenient services. Many employees are disappointed with conventional mobile phones, or expect their employers to offer devices with the same operating systems and features. The trend is that companies today are beginning to allow their employees to use their own mobile devices to access the company's network services. More employees also accept to pay for and bring their own device, or the employer can choose to pay a certain amount to each employee to buy their preferred devices. This tends has its own term: Bring Your Own Device or BYOD, and is one of the drivers for IT investment. If companies adopt the right strategy, they can both manage to control cost for investment in devices to mobilize their employees, and becoming more efficient at the same time, as their workforce can accomplish their assignments at anytime anywhere.

Clouds are already part of our lives.
As mentioned, mobility is an important feature of today's web services, and the success of the these services depend heavily on the presence of good mobile broadband connectivity. This is because many of the applications and services offered today are build on cloud infrastructure. Cloud as a concept does not make sense to most people, but many popular services are already build on cloud infrastructure. Mail services like Gmail, Hotmail, and many others are cloud-based in the sense that they are hosted somewhere out on the Internet, and can be accessed at anytime and anywhere, especially when we start to use our mobile phones. Years back, we used to download our emails to our desktop or laptop computers, and the mail where deleted from the central server. This meant that we could risk loosing all our email correspondence if the computer broke down, or when migrating to a newer computer. Most service offered from the large Internet companies already mentioned are based on this cloud concept, and IT, Web, and Telecom Services are rapidly converting into one market through these synergies.

Market status.
Mobile broadband is growing rapidly in Brazil and in October 83 million broadband connections where recorded. This corresponds to a 58% growth over the last 12 months. 63 million of these broadband connection were mobile, and they grew 81% over the last year.
Today, the Brazilian IT market is the 6th largest in the world with a size of $112 bn in 2011, representing a 13% growth compared to 2010, and corresponding to 4,5% of the Brazilian Gross Domestic Product (GDP). The telecom market represented an addition volume of $100 bn in 2011. The latest estimate for the Brazilian IT market in 2012 issued by Brasscom - the Brazilian association of IT companies, is forecasting a growth of 14%. The Brazilian IT sector does relatively little export with only $2,65 bn for 2011 corresponding to only 2,3% of the total. Most of this export is software, as Brazilian manufacturing has yet to achieve a competitive level compared to the global market.
The slowdown of the growth in the Brazilian economy, and the increase in consumer dept is expected to influence in the development of the Brazilian IT market for 2013 with a weaker trend.
It is often discussed whether the investment in IT can help countries grow. The McKinsey Global institute has released a survey showing that the Internet contributes to 21% of the GDP growth in developed countries, compared to an average of 3% for the BRIC countries in the period from 2004 to 2009. This should be matched with the report from Eurostat 2010 revealing that for each job position opened in the IT sector in India, another 3,6 positions are opened in other sectors. These are two good reasons to invest in the IT sector.

The Brazilian Government is giving incentives to make the IT and Telecom industries help the country to grow.
It is widely accepted that investments in the IT and Telecoms industry spur growth in other sectors. The Brazilian government is implementing this vision through the re-construction of Telebras and the voting of Provisional Measure MP 563 to accelerate infrastructure investment, with the right to issue tax-free bonds for special purpose infrastructure projects, which is now attracting more foreign investments to the country. As slow as the growth outlook might be for the moment, the IT investments will help the GDP growth for the coming years.

Apple looking for Waze to solve the mapping issue 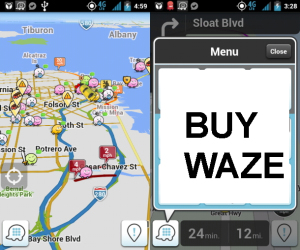 Funny that I should write a post about Waze, and the news would brake a few days after that Apple is looking towards Waze as a possible way out of the mapping issue they got into after shredding Google Maps as a pre-loaded app for the iDevices.
Posted by Jesper Rhode at 1/03/2013