Will Wi-Fi off-load save us?

So Wi-Fi off-load seem to be the savour of our times.

It is very interesting to note that with hundreds of megabyte of spectrum sold to the mobile operators, it is apparently the un-licensed general purpose spectrum in 2,4 GHz and 5 GHz which is going to be the solutions to the ever growing data volumes that operators are trying to coupe with.

I got curious and read trough 5 reports from well estimated suppliers of industry analysis about Wi-Fi off-load, and none of them talks anything about the outlook for the scenario where all private and public Internet connectivity providers seem to be heading for the same crowded street. My feeling tells me that we are heading for congestion.

In licensed spectrum operators do their own radio cell planning, because they know that others are not allowed to interfere with the transmission that they provide. In the un-licensed frequency bands however, everybody seem to be doing their own planning for the same spectrum. 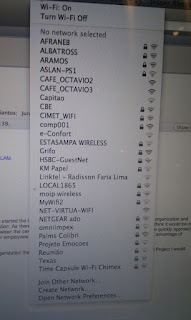 Some global operators have informed that up to 70% of their current fixed and mobile broadband data volumes are now being transmitted via Wi-Fi at some point, and the above named industry analysts estimate that mobile operators will be off-loading at least 40% of their traffic in 3-5 years.

It is good to see that the Brazilian regulator, ANATEL, has taken initiative to establish targets and measurement for the quality of broadband services in Brazil, where some operators are being criticized for delivering much less than what their customers are paying them for in terms of bandwidth and availability. On the other hand it is difficult to understand how operators can guarantee the quality of a service when depending on shared spectrum where there is no entity responsible for the planning and utilization of the spectrum, other than the general purpose certification of the transmission equipment required by ANATEL. One of the consequences is that when I go to a downtown restaurant to try to get on a Wi-Fi network toady, I get a long list of networks all struggling for the same spectrum, as you can see on the enclosed picture. There are also several reports where people get lower performance of the their installed Wi-FI at home when the public and operator driven Wi-Fi networks begin to transmit on the same channels used for the home solutions. 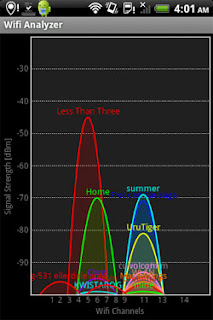 Maybe one of the reasons for this increased interest in the un-licensed frequency bands is coming up now because operators and other industry players are realizing that with the current growth in data volumes, there is no other way out than to go for smaller cells. There is no way that each user can seize a transmission channel in an area of a square kilometer or more when spectrum is a scarce resource. It seems that the vendors of cellular technologies (CDMA and GSM), moving on with 3G and 4G, have not been too keen on developing equipment for these small cells, and that operators now see a change to get acquainted with low cost technologies that that serve the need for smaller cells. The trade-off, however, seem to be that everybody will deploy in the same limited spectrum with little or no coordination between the players.

If you have an Android phone, you can download the Wi-Fi-analyzer shown here at the picture, and check out if the Wi-Fi frequencies near you are congested.

Ericsson's acquisition of Belair should also be seen in this light. Ericsson has lately decided to accelerate its strategy for small cells. It would however, only be natural that both the small cell strategy and technologies with the same cost level as for Wi-FI would spread into the licenced bands also, using LTE for example. This might not be in all of the current cellular tech providers interest, but it would make sense from two points of view. Small cells give higher data traffic densities in any frequency, and thus also for the licenced spectrum, and LTE 4G is the latest set of very robust cellular coverage technologies with great resistance to interference and made for continuous coverage.

There is no doubt that Wi-Fi is gaining importance, and with up to 90% of tablets sold with Wi-Fi as the only way to connect to the Internet, the Wi-Fi demand will continue to grow strongly for some time going forward.

One thing is for sure: The efficient usage of spectrum will continue to be a hot topic for years to come.
Posted by Jesper Rhode at 3/23/2012