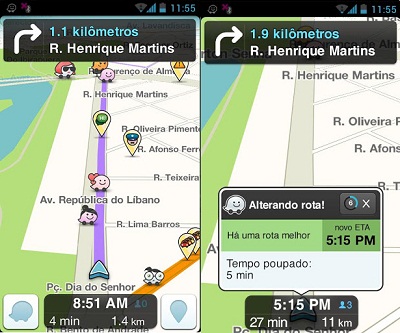 IT in a very competitive world 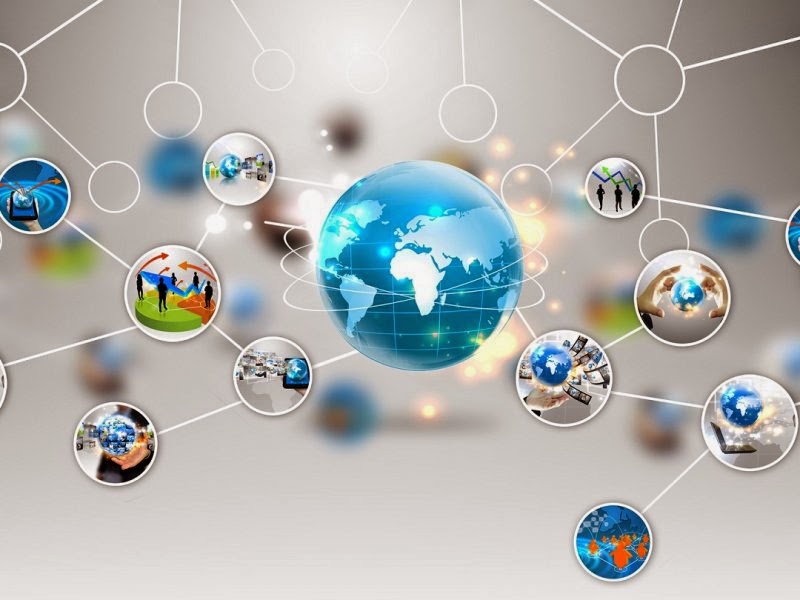 It was once said that Telecom and IT, or ICT, is like the blood flowing in our veins connecting and
keeping all part of the body well-functioning. Studies from London Business School also show that for each 10 percentage points increase in the utilization of broadband connectivity, GDP is boosted with about 1,2%. ICT has now become ubiquitous, and takes an important role in the life of nearly all of us. One of the strongest evidences is the mobile phone, where companies like Google, Microsoft, and Apple are working on creating large eco-systems that can support us in nearly all aspects of life. In this way we can say that we are creating the Networked Society. This article will examine some clear indications of changes, and the impact on our economy at large.

First of all, the economy of the networked society is very efficient in generating value. In just one day, ICT and the Internet is generating USD 2,7 billion in ecommerce, 700.000 new Internet users, 133 million hours of YouTube watched, 328 million apps downloaded, and 2,7 billion photos taken. In 1990, the center of the US car industry with Chrysler, General Motors, and Ford, in Detroit employed 1,2 million people, had 1.600 billion in revenue, and was worth about USD 30 billion in market cap. In Silicon Valley today, Facebook, Apple, and Google are employing about 130.000 people with USD 1.400 billion in revenue, but has a total market cap of about USD 950 billion, with only 10% of the number of employees. The value creation and concentration in the ICT industry became clear to many this year, when Facebook acquired WhatsApp, a mobile messaging company founded in 2009, for about USD 18 billion. 2014 was also the year when Microsoft acquired the former highly estimated mobile phone business from Nokia for about USD 7 billion. WhatsApp, which prime product is a messaging application for mobile phones, was sold for more than two times the value of Nokia phones. The rationale behind that is based on the time that we spend on these services, and the information about our whereabouts has become highly valuated in the economy of the Networked Society. Facebook, with a market cap of about USD 200 billion, and 1,3 billion users, is worth USD 150 per user. WhatsApp, with about 500 million users was acquired for USD 36 per user, who in turn are more loyal than the Facebook users in some aspects.

One of the new paradigms about the Networked Society is that data is the new oil, and we are leaving trails and data about ourselves on the Internet sites and services where we spend our time. Most of this data is used to make marketing and advertising campaigns more accurate and relevant to consumers. Large brands are paying well to get in and have their advertising placed to consumers in the right moment of a buying decision. Where we spend our time, is where the large bands can reach us, and TV is becoming a winner at this game. In the 70’ies we spend in average 17 hours a week on TV. In 2013 that had increased to about 35 hour per week, and research shows that in about 4 years we will spend close to 50 hours on TV per week. This does not mean that we will sit in front of the big screen at home all that time, but as TV is transforming to YouTube, Tablets, and mobile devices, we are watching more and more TV on these devices, inside or outside our homes. Research from the UK ICT regulator Ofcom released in August 2014, shows what the Brits in average are now spending more time on media and communication than on sleeping. 8 hours and 41 minutes of media and communication, against 8 hours and 21 minutes of sleep, and only 6 hours and 58 minutes with activities not involving media. The same survey also reveals that adults above 16 years spend in average the same time on a traditional TV set as they spend in Smartphones and Laptops, whereas the young segment from 16 to 24 years spend 2,5 times as much time on their Smartphones and laptops compared to a TV set, namely 515 minutes per day (fig1). 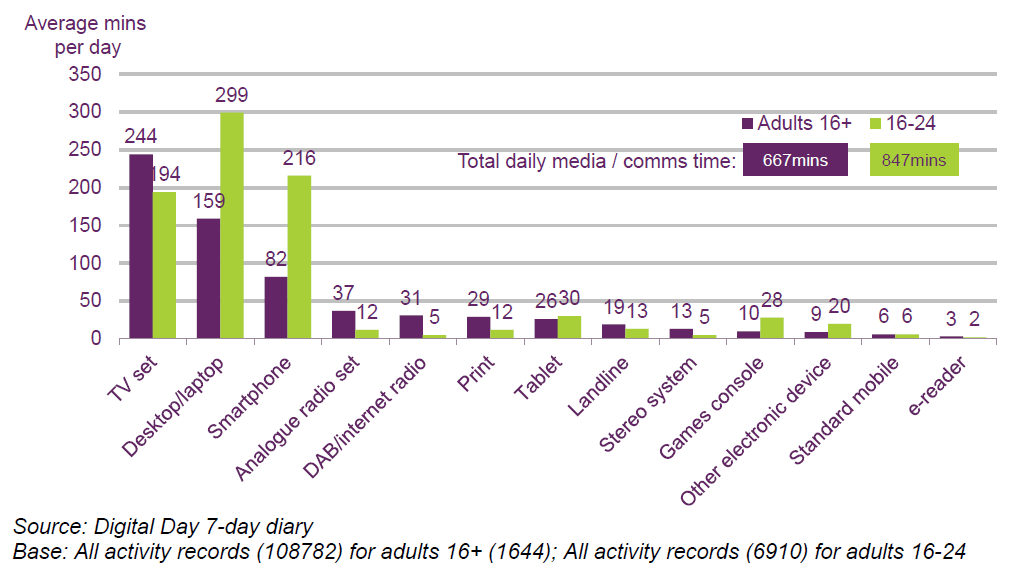 These ICT trends are also having significant impact on the Brazilian economy. The Brazilian ICT industry is well developed, and getting mature as Internet and communication services are now connecting a very large part of the population. Telebrasil, the association of telecommunication operators in Brazil, released in July their consolidated numbers showing that Brazil now counts 161 million broadband connections. A 51% increase over the last 12 months. Of these, mobile broadband on 3G and 4G connections corresponded to 85%, namely 138 million connections. A 61% increase compared to same time last year. 119 cities in total, and 45 cities with more than half a million inhabitants have 4G coverage today, and 3.730 municipalities corresponding to 92% of the national population have 3G coverage. In July, the telecommunication statistics site, Teleco, reports 276 million mobile subscriptions. This means that Brazil now counts with a penetration of mobile telephony of 136% measured on number of subscriptions. In comparison Denmark has a penetration of 150% and USA 106%. The penetration of smartphone use is also beginning to take off well in Brazil, where nearly 30% of phones today are smartphones, compared to about 60% in Denmark and USA. This fast maturation of the Brazilian ICT industry has contributed well to growth in the sector over the last few years. According to the association of the Brazilian ICT industry, Brasscom, Brazil was in 2010 ranking as number 6 in the list of the largest ICT economies, and has advanced two positions to number 4 in 2012 passing UK and Germany, and the size of the industry in 2012 was about USD 160 billion. The industry has yet to increase its export. In 2012 the country exported USD 526 million of software, and USD 1,33 in ICT services.

ICT is important for the socio-economic development in Brazil for the years to come. ICT is a driver for Economic development through job creation, leap in competitiveness and productivity, and the development of small and medium size companies. In Rio in 2011 the company Easy Taxi was started by a local entrepreneur Tallis Gomes. The application helps people to quickly find a free taxi, and works in smartphones. As many of the disruptions in the ICT industry, it adds value to both the sector and its clients. Customers receive information about car license plate, phone number and ID of the driver, already before the taxi arrives. If you lose something, you just call the taxi driver right away. The business model cuts out the costly taxi cooperatives, and gives a better business flow for the driver, who can now also receive payments and issue receipts through the app. Only the taxi cooperatives may not be happy as they are cut out of business, but that is part of the efficiency that the ICT creates, where gatekeepers and intermediate links are eliminated. Easy Taxi has with capital injections of USD 32 million been able to expand to many Brazilian cities, and is now also available in 80 cities in 27 countries adding three cities per month. Easy Taxi is currently evaluated at USD 100 million in market value by worldstartupwiki.org. Talking about traffic, the municipality in Sao Paulo calculated that traffic congestion is responsible for the loss of BRL 40 billions per year in the city alone. According to Globo.com, apps like Waze, a smartphone based social GPS application sharing traffic information among its users, which were used by more than 6 million Brazilians already in 2013, can save 20% or more in driving time, corresponding to a gain of BRL 8 billion. ICT is also important for social development. Both the education and health sectors see great benefits of ICT. These are sectors that are essential for the development of Brazil going forward. High productivity is reached through education and innovation, and here Brazil has a chance to leapfrog with the introduction of ICT. The distance teaching division, EAD, part of SENAC, estimates that 25% of courses in higher education in Brazil today are done as distance teaching, and that this market will double in 5 years. The market is expanding with 12% per year against 4% for normal education. ICT can help to cut the prices of the courses with up to 75%. This means that now most Brazilians, no matter where they live in the country, can get access to higher quality of education, and we will surely see the results of that in the coming years. A leading institution in distance learning in Brazil, Universidade Norte do Pará, was sold to Kroton Educacional for BRL 1,3 billion in 2011, so there are already significant investments in developing ICT based education in Brazil. It should be clear to the management of any business that ICT is a significant contributor to efficiency and hence to growth. Governments from national to municipal level are placing ICT high on the priority list for 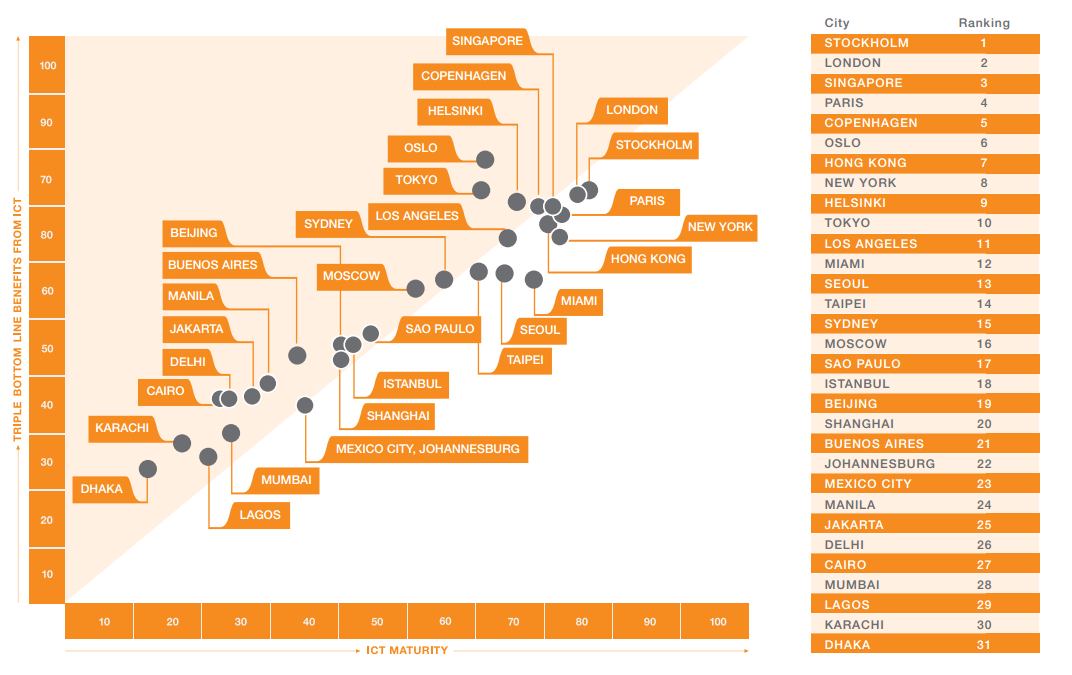 accelerating development. The Brazilian government has launched an ICT development program called TI Maior, with a budget of BRL 500 million until 2015, of which BRl 40 million is reserved to boost new startups through the program Startup Brasil. Many municipalities are also setting up technology development centers, and according to Brasscom, Brazil has 40 of these centers today spread all over the country. In order to describe the gain and advance of ICT in multiple sectors in cities around the world, Ericsson, a leading telecommunication infrastructure vendor, created a Networked Society City index 2013, that ranks cities according to the ICT maturity (fig2), and the sustainable triple bottom-line benefit that the city reports. Placed at number 17, Sao Paulo is the highest ranked among the evaluated cities from Latin America, in front of Buenos Aires, and Mexico City. Copenhagen is number 5 after Stockholm, London, Singapore, and Paris.

This article was written for Brazilian Review 2014